30 Years of Ensemble Forecasting and Symposium for Prof. Tim Palmer 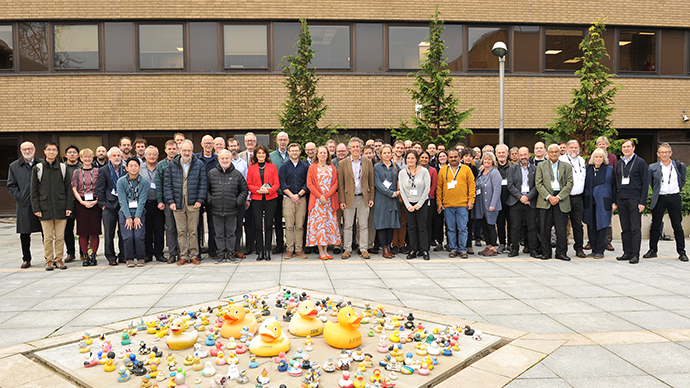 On 5 and 6 December 2022, ECMWF and the University of Oxford held a symposium to celebrate the career of Tim Palmer.

The first operational medium-range ensemble forecasts were introduced at ECMWF in 1992, and since then have transformed the way weather forecasts and their uncertainties are understood, communicated and utilised. To celebrate the 30th anniversary of this significant milestone for numerical weather predictions, ECMWF hosted the first day of this symposium on 5 December 2022 at its headquarters in Reading. The day of talks, reflections and vision helped celebrate Tim Palmer's career, one of ECMWF's most influential protagonists.

In 1963, Ed Lorenz showed that due to the chaotic nature of the atmosphere, even very small initial errors would eventually prevent the weather being predicted in detail. However, the timescale for such unpredictable effects to occur would vary from one initial state to another, and sometimes small initial errors could affect the forecasts within a very short time. Such flow-dependent error growth and predictability can be estimated from the spread of forecasts made from slightly different initial conditions. This led to the development of the operational ensemble prediction systems at ECMWF, starting in the second half of the 1980s, and ensembles are now at the heart of ECMWF’s global forecasts at all time ranges from the ensemble of data analysis to the medium-, extended and longest seasonal forecast ranges. Ensemble-based probabilistic forecasts have become immensely successful for both the scientific developments of weather, climate and environmental predictions as well as for a wide spectrum of sectorial applications. They can provide more value to users in our Member States and beyond for their decisions to be made than deterministic forecasts are intrinsically able to.

Tim Palmer’s professional career has been profoundly linked to ECMWF’s ensemble prediction system. He was at the forefront of the development of the scientific basis for probabilistic forecasting and the implementation of the first operational ensemble predictions in the early 1990s. After leading the Predictability and Diagnostics Section, and when Council gave its approval to develop seasonal prediction systems at ECMWF, he became Head of the new Probabilistic Forecasting and Diagnostics Division. Tim left ECMWF in 2011 to take up a Royal Society Research Professorship at the University of Oxford’s Physics Department. However, he has worked very closely with ECMWF since then, in the development of low-precision numerics, the use of AI in weather forecast models, and in establishing the new Destination Earth initiative.

With Tim now turning 70, we looked back at his career at ECMWF, reviewing the road that the ensemble prediction system has taken over the last 30 years and looked ahead to what the future might hold for it. The presentations of the symposium reviewed the history that led to the development of operational ensemble forecasts, the initial perturbation and model uncertainty strategies as key characteristics of an ensemble configuration, the use of ensembles across time scales from weather to climate, and its value for humanitarian disaster risk management and commercial applications in the world of energy markets. ECMWF’s next planned upgrade of the operational modelling cycle will see a unified high-resolution 9-km global ensemble as the centre piece of our medium-range prediction, a truly marvellous prospect for the future of ensemble forecasting.

A second day of talks marking Tim’s career was held at the University of Oxford on 6 December.